He attended L'Ecole Rurale de Despas in Coteaux from 1955 to 1961. As a boy, he displayed a ferocious appetite for learning and proved his determination by walking two hours to and from school. He then attended Brevet Supérieur in Coteaux, from 1961-1964 at L'Ecole de Notre-Dame de Lourdes .

In 1968, he joined the Haitian Marine and served honorably as a decoder during a two-year tour of duty before he headed to the United States . He lived in Brooklyn , NY from 1970 to 1981, where on October 28, 1972 the then mature young man accepted Jesus Christ as his personal Lord and Savior at Eglise Baptiste d'Expression Française, led by Pastor Jean-Baptiste Thomas. In April 22, 1973, he confessed his faith in baptismal water, and became an active church member. True to form, he immersed himself in various church activities including the youth choir, men's choir, disciplinary committee, youth group leader, and coordinator of ushers.

In April 1975, Pastor St-Ulmé met the love of his life, Rienne Dubuche; which after six months of courtship, were married on December 27, 1975. God blessed their marriage with three children (Danielle, Othniel, and Benjamin). In 1981, God spoke in St-Ulmé's heart to relocate in the Washington , D.C. area to minister to a growing Haitian population. He faithfully obeyed God's calling in December 1981 when he and his family moved from Brooklyn , NY to Silver Spring , MD. From January through May of 1982, St-Ulmé led a prayer meeting in the living room of his apartment, and founded the Haitian Baptist Mission of Silver Spring to continue an outreach mission started by L'Eglise Baptiste d'Expression Française. Formal inauguration of what has become L'Eglise Baptiste Du Calvaire ( Calvary Baptist Church or EBC), occurred on May 16, 1982, and St-Ulmé was named lead Pastor. He was ordained on July 24, 1983.

Pastor St-Ulmé has made God's missionary works a priority. He has organized two churches in Haiti , one in Despas, Coteaux, and another in Meyer, Jacmel. The Spirit of God has accomplished several church-building activities through his life, including ongoing projects with:

Since 1999, Pastor St-Ulmé has been an instructor at the Centre d'Etudes et Documentations Evangéliques (The Center of Studies and Evangelical Documentations) in Brooklyn , NY ,

where the Reverend Joseph Théodore is the program director.

​Pastor St-Ulme's credentials and other accomplishments include: 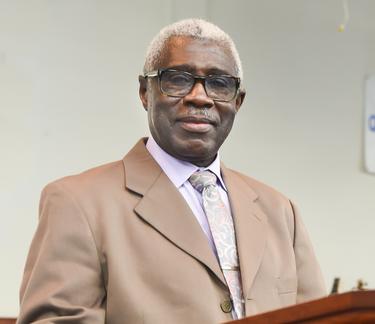